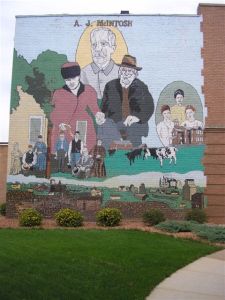 Angus J. McIntosh gave his name to a town in which he would live only briefly.  An enterprising individual, he purchased some of the open land in the town site located a few miles west of his store and lodging house.

In the year 1882 the thirteen towns were opened for homesteads and the year of 1886 started the settlement of McIntosh.  Mr. S.P. Johnson (the first settler) realized the advantage it would be to settlers to have a village in this locality.  He came upon this tract of school land, after much deliberation and planning, he succeeded in getting Ole Lee and Knute Austin to be interested in his plans.  Mr. McIntosh had a general store located north-east of this school land, known as “Old McIntosh.”  When Mr. S.P. Johnson started a general store on the school land, this became known as “New McIntosh” making the “Old” and “New” rivals.  There was much excitement when the railroad came in, to see which one was to be the winner.

There are no upcoming events.